South African photographer Sabelo Mlangeni is an explorer of queer lived experiences across Africa. One example was a group of photos he assembled last year under the label “The Royal House of Allure,” which tenderly documented the residents of a safe house for queer folk in Lagos, Nigeria.

Carl Collison interviewed Mlangeni and reported on last year’s exhibition of the photos in South Africa. Excerpts from the article and interview are below:

Above the reception desk of Cape Town’s Blank Projects gallery, to the right of a bunch of pink irises, is a black and white photograph of Sabelo Mlangeni. In it, the photographer lies on a concrete floor, his head resting on the chest of another young man. The two are holding hands and laughing with closed-eyed glee at whatever just made them laugh.

It is a rare sight, a photographer captured while sharing a joyous and intimate moment with one of their, for lack of a better term, “subjects”. Rarer still for such an image to form part of the exhibition. But The Royal House of Allure is more than just a body of photographs. For Mlangeni, it is the product of, at times, uncomfortable self-reflection and, ultimately, the forging of deep connections with members of Nigeria’s marginalised LGBTQIA+ community.

Produced during a two-month residency for the Lagos Biennial, the body of work was originally intended to “investigate how social media is influencing celebrity culture in Lagos”. The idea, however, fell flat as soon as he arrived in the country’s capital, with the person he was intending to follow -– a transgender woman with celebrity status –- ghosting him through no response.

“You know what it’s like … You can write up a proposal, but when you get to a space, things change,” laughs Mlangeni, the winner of 2009’s Tollman Award for the Visual Arts and POPCAP’16 prize for Contemporary African Photography.

Forced to come up with a plan B, the photographer did some sleuthing online that led him to the House of Allure. A safe house for queer people in Lagos, it offers an essential service. Nigeria does, after all, have a reputation for being deeply queerphobic. It was in the safe house that Mlangeni spent two months creating the intimate and tender images that make up his latest exhibition.

A few days after the opening night of The Royal House of Allure, Mlangeni spoke of the bonds he forged while documenting the house and its members, the veritable minefield that is being queer in Nigeria and the responsibilities younger-generation photographers have when “telling our own stories”.

Collison: You spent two months documenting the house and its members. What, to you, is special about the space, or spaces like these generally?

Mlangeni: What the house does is it gives [its members] a sense of belonging. What I’ve witnessed was that the minute people walk into the house, they become themselves. Like, they completely open up. But the minute they walk out, they are living in fear again. One of the members, for example, was arrested because of his blue hair. He had to sleep in a police station. He had to bribe the police to get out. And what [the police] do is they go through your phone. If they find something, then, you know…

Collison: You’re lucky to have been granted access to that space because it’s kind of sacred, in a way, in that it gives people hope, the space to be themselves. Also, considering the safety and security around it…

Mlangeni: Definitely, I was lucky. Because with spaces like these, it is not easy as an outsider to be taken in and accepted. Also, this is my first time working on a body of work where there were so many rules. Like, being asked not to use their real names and other things. Because of security. But with some of the pictures, they said, ‘Let’s go outside and take pictures.’ But I was always questioning myself and asking, ‘Doesn’t this put them in a dangerous position?’ So I was always worried about that.

Collison: How many people live in the house?

Mlangeni: Aside from the housemother, Mr Morrison, there are about 10 or more people in the house. There are two bedrooms, so most of them would shift the couch and things, because people are always coming in and out. Sometimes there are 15 people. Mattresses on the floor. Also, it is self-funded. Mr Morrison is the one taking care of everything, but what I like is that he enhances the talents of the people in the house. So sometimes people will do appearances, some are designing clothes. There is a sewing machine that is shared by about three or four people in the house. There are even bakers and chefs.

Collison: Earlier, you told me that for people like the celebrity transgender woman you were initially going to follow, “because they are in that celebrity culture space, it is easier for them to be queer”. But the people in this safe house are obviously not lucky enough to be cushioned by class or money or popularity?

Mlangeni: Yes, most of them are unemployed. All of them have these sad stories. One of the members’ parents died when he was young, so he went to live with his aunt. But his aunt used him as a child slave, so he started working the streets as a sex worker. At the age of 16, Mr Morrison spotted him and brought him into the house. He’s been living in the house ever since.

Someone else was outed by his own mother while he was in assembly at college. After that, he was kicked out of the family home.

Collison: Why is it so important to you to document queer experiences on the continent?

Mlangeni: I mean, you should know, because we are doing almost the same work … But how many times have you heard anything in-depth about LGBTIQ communities in the Congo, for example? You hardly hear these stories. And then, once you are there, you realise there is a big community. And that that community, as much as it is in a sort of isolation, it is still there.

Collison: So it is about visibility?

Mlangeni: Everyone is talking about visibility. Like, “I’m doing this for visibility”. But even visibility needs to be questioned. …

But there is also the question of what does it mean for the work to be displayed in countries in Europe, for example.

We were in Viennna and I had just presented five images of Soweto and Johannesburg Pride Parades and someone came up to me and said, “I didn’t know there were so many gay people in Africa.” I was like, “These are only five photographs.” But this is also the fact that people think there are no gay people in Africa. I freaked out.

Collison: What would your one hope be for this body of work? Or your work generally in documenting queer lived experiences?

Mlangeni: That’s a difficult question (laughs). Look, sometimes I feel like we are now starting to tell our own stories. And when we are telling our stories, we are not telling them out of nothing. There is history in the way our stories were told, which was not always in a dignified way.

With this work, for example, we know very well that it is really so difficult for them to live openly in Lagos. But I wanted to show that here is a community, here is a house, here are people. They have their challenges but … they are still doing their thing. And they are living.

This article was first published by New Frame, a not-for-profit, social justice media publication based in Johannesburg, South Africa. 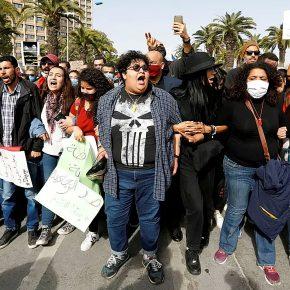