Senegal has intensified its repression of LGBTQ+ people amid escalating  anti-gay propaganda and political pressure from the strict Islamist organization JAMRA.

By Colin Stewart and Moïse Manoel

On Oct. 16, police broke up what they claimed was a “gay marriage” in the Keur Gorgui section of Dakar and arrested 25 people there.

The prosecutor has proposed that they be sentenced to two years in prison. A verdict in the case is scheduled for Nov. 6.

The people attending the party in Keur Gorgui were spotted coming and going and reported to police by neighbors, according to Souleymane Diouf (pseudonym), leader of the FREE collective, which defends the human rights of LGBTQ+ people in Senegal.

After the 25 arrests, police also arrested four teenage girls — three of them minors — on charges related to lesbianism. The girls were brought to court on Oct. 23, the same day as the trial of the 25 men. The teenagers appeared in children’s court and were released. Because of their youth, the specific charges against them were not announced.

“As an activist, I fail to see what the 25 suspected gays did that was illegal and that triggered intervention by police. They rented an apartment to meet up and have fun. I don’t see what’s wrong with that.

“Under Article 319 of the Senegalese penal code, ‘unnatural’ acts are only condemned when they are committed in public. This offense is punishable by up to 5 years’ imprisonment and a fine of up to 1.5 million CFA francs (about US $2,700). But if such acts occurred, it was in a private setting.”

Erosion of the rule of law

“In Senegal, in addition to homophobic laws, police carry out arbitrary detentions based on their own feelings and their own personal values. This is why we published a declaration last Tuesday expressing concern about the erosion of the rule of law in Senegal.

[That statement, titled “In Senegal, we want the same rights for everyone”, was signed by 22 activists in Senegal and by seven international supporters. It is currently available only in the original French.]

“The most serious thing for me in this new sordid affair is the fact that these young people were filmed without their knowledge during the police raid. Police and the media worked together to generate ‘buzz’ and homophobic animosity. Then the police tortured the detainees to extract confessions or obtain names of other gay people who could tracked down throughout Senegal.”

This is the first time in Senegal that such a large number of homosexuals have been arrested, he said.

Stabbed in an anti-gay attack

Diouf was instrumental in helping 10 gay men flee Senegal after they were arrested on Sept. 20 by religious police in the holy city of Touba. With support from exclusive articles on this website and funds from international donors, the men traveled into exile in neighboring countries on Oct. 2 (six men) and Oct. 17 (four men). On Oct. 5, in the midst of his work in Touba, Diouf was attacked and stabbed by anti-gay assailants.

Since then, Diouf stated, “My health has improved, but I have regular medical monitoring. The stab wound I received in the lower back left its mark and I still feel the pain today.”

He remains on edge and takes extra precautions about his personal security, he said.

“I remain a target and still receive threats,” he said.

Media coverage about the arrest of the 25 suspected gays in Dakar spread like wildfire across Senegal, which intensified the country’s homophobic atmosphere.

“The marabouts revel in it in an unhealthy way,” he said. “It’s like honey for them  on social media.”.

“I’m trying to hang in there until the storm passes, but worries about what might happen hang over my head like a sword of Damocles. All of Senegal’s LGBT activists are in the eye of the storm. We live from day to day in fear of a vast sweep of our network in order to cut us off from our connections inside Senegal and elsewhere in West Africa and abroad.”

“Senegal is experiencing a general decline in individual freedoms. Reactionary forces are trying to frighten, intimidate and gag LGBT communities so we will not disrupt the marabouts’ [religious leaders’] control of the political and social order of Senegal. As LGBT activists, this social order is what we keep vigorously denouncing.

“The emergence of local LGBT activism has radicalized the conservative political rhetoric of the marabouts, who deviate from true Islam for the purposes of social control of bodies and sexuality. For several years, we have been witnessing slow deterioration of LGBT people’s security. Gays and lesbians are now arrested on the slightest pretext anytime, anywhere.”

It is also working with government officials to apply pressure on 16 non-governmental organizations that work with the LGBT community on issues such as human rights and AIDS prevention, he said.

The associations are summoned to justify themselves and are threatened with retaliation, he said.

The Senegalese League for Human Rights, for example, on several occasions has publicly dissociated itself from any work with the LGBT community. It actively collaborates with JAMRA on many other issues relating to human rights, Diouf said.

“I consider JAMRA to be a terrorist organization,” he said. “This week, JAMRA, through its spokesman Mame Matar Gueye, called for the murder of every gay man living in Senegal. He said that with impunity.”

“Foreign embassies of countries friendly to Senegal are regularly singled out for their supposed role ‘in the development of homosexuality in Senegal. JAMRA circulates the misleading idea that homosexuality is a degenerate Western practice that would not exist in Senegal if it had not been introduced from foreign countries of the North.

“We hear this on TV and on social networks in full view of everyone, where homosexuality is presented as a disease and cancer to be eradicated from the body of Senegalese society.”

“JAMRA warns that unrest will break out in Senegal against the gay community if the 25 suspected homosexuals are released.”

Media in Senegal suggest that the 25 presumed homosexuals would be lynched if they are released.

“Personally, I would like the United States and the European Union to put JAMRA on the blacklist of organizations that trample on human rights.”

In the wake of the arrest of the four teenage girls, “the homophobes are in heaven. They are delighted. They don’t even hide their satisfaction. [From their point of view] this type of crackdown on homosexuals was long overdue.

That homophobia isn’t embraced by everyone in Senegal.

“Other people in Senegal, more circumspect, believe that respect for dignity and human life must be maintained,” Diouf said. “There is a difference in public opinion, but the balance of power is clearly very unfavorable to sexual minorities and in favor of the marabouts. So many people are silent — out of fear.

“Many people think that this situation is unsustainable. The tension is palpable. The deafening media and political silence in the face of human rights violations is very uncomfortable for many people.”

Senegal President Macky Sall should break his silence, respond to those who advocate the murder of homosexuals and demand that the nation return to the rule of law for all, Diouf said.

Moïse MANOËL-FLORISSE, is an african-caribbean web-journalist keeping an eye on human rights abuses in french-speaking areas. 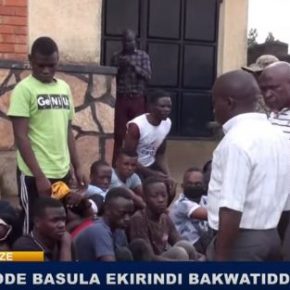