Four young men who were arrested on homosexuality charges on June 9 in Kekem in West Cameroon were presented on July 28 to the court of first instance of Bafang, which imposed fines on them and allowed them to go free.

The case had roiled the Cameroonian press, which was intrigued by the story of a young man (identified here as “Charles”) who was forced by his family and police to denounce his lovers.

LGBTI rights advocates at Humanity First Cameroon (HFC) and Working For Our Wellbeing (WFW) dispatched a legal adviser to assist the four detainees during the various hearings that they faced. The organizations’ work was coordinated through the Prides-CM consortium of organizations fighting against HIV and for the human rights of sexual minorities.

The lawyer’s initial advice was for them to plead not guilty and seek dismissal of the charges. But since Charles had confessed in front of his family and the police, the lawyer’s advocacy strategy was changed.

The four men eventually pleaded guilty in order to allow the lawyer to highlight extenuating circumstances, including the fact that the confession was given under threats and torture.

The court of first instance accepted the guilty pleas of Charles, Franck, Lincoln and Joël.

Because the families of the defendants were unwilling to pay their fines,  HFC and WFW provided financial support so the young men could regain their freedom.

They were provided housing at various shelters in Yaoundé and Douala for three months so they could work to resume normal productive lives.

HFC and WFW asked for community solidarity so the young men can be provided with psychological support to help them recover from the  trauma of their arrests and imprisonment.

The author of this article, John Enama (a pseudonym), is a human rights activist in Cameroon.

For more information, read this Rights Africa article from June 15 about the arrests:

Police in the western region of Cameroon arrested four men on Tuesday who were beaten until they acknowledged that they were gay.

It was around 9 p.m. last Tuesday when Charles, 27, went to a secluded spot behind a school building for a rendezvous proposed online by Garusse and Jordan, two men he didn’t know.

Instead of the enjoyable encounter Charles hoped for, the men beat him up.

Bruised, he returned to his family home and explained what had happened. Instead of comforting him, family members beat him up again. They forced him to tell them which of his friends were gay.

The family alerted police, who arrested the four young men and tortured them until they acknowledged their homosexuality.

On Friday, June 12, police turned them over to the prosecutor at Bafang District Court. Joël was released, thanks on the intervention of his older brother, a lawyer. The other three were placed in pre-trial detention at the prison in Bafang.

They were scheduled for a hearing today (June 15) on charges of indecency and engaging in homosexual behavior.

Under Article 347-1 of the Cameroonian penal code, the practice of homosexuality is punishable by up to five years in prison, but that law does not make sexual orientation a crime without intimate sexual relations.

In the Kekem case, police produced no evidence of homosexual activity. As a result, LGBTI rights activists consider the arrests illegal.

The LGBTI-friendly groups Working for Our Well-being and Defenders Without Borders (Defenseurs Sans Frontieres) have stepped in to help with the defense of the three defendants.

The three also appealed for help from a psychologist and a doctor. 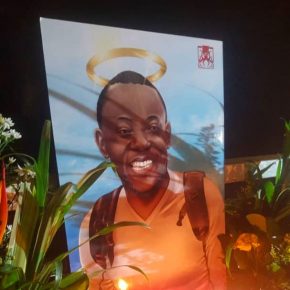 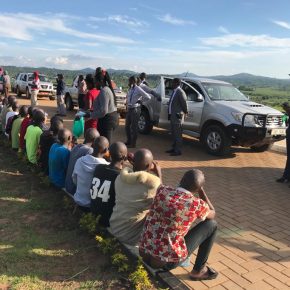