In North Africa, LGBTI advocates are slowly achieving awareness of the human rights of sexual minorities, despite repressive governments and homophobia societies that extend from the Atlantic to the Red Sea.

Two Moroccan activists provide an overview of the situation. This article is published here courtesy of ILGA, the International Lesbian, Gay, Bisexual, Trans and Intersex Association:

Courage and Resilience Amidst Oppression

Mechanisms of Adaptation and Resistance to Repression in North Africa

By Naoufal Bouzid1 and Khadija Rouggany

The situation of LGBTQI + people in North Africa is characterized by a context in which 4 countries still criminalize sexual acts between adults of the same sex: Mauritania, Morocco, Algeria and Tunisia. Additionally, Egypt does not formally have norms that explicitly criminalize this type of acts, but in practice they are criminalized under other legal provisions (de facto criminalization).

This criminalization carries penalties ranging from imprisonment and the fine to death, in Mauritania. In addition, the regional context is marked by a repression that goes beyond limiting the sexual and emotional life of LGBTQI+ people. The laws restrict the right to freedom of assembly and association in all the countries of the region, except in Tunisia, where civil society has managed to found and officially register several LGBTQI+ organizations. Similarly, freedom of expression is often severely limited, notwithstanding initiatives that seek to empower local communities, often running the risk of being persecuted. Therefore, despite a difficult context, queer groups are emerging under their own dynamics – groups whose objective is to improve the lives of those who are affected.

In contexts where repressive laws continue to oppress LGBTQI+ people and create barriers to the formation of human rights organisations, local activists in the region opt to organize around informal groups/collectives. Under that scheme, they carry out their work to the extent they can. Although for the moment it is mostly discrete activities, they are progressively achieving a certain level of visibility.

Arts and festivals committed to diversity

When words, slogans and harangues are no longer enough to achieve mobilization, art committed to diversity stands out as an effective alternative voice. The objective is to raise awareness about the human rights of LGBTQI+ people and democracy, through an interactive dynamic: that of cinema, music, and theater that reflect the difficult lives of LGBTQI+ people in Northern Africa. Among these initiatives are the Chof-tohonna festival and the Tunisian International Festival of Feminist Art LBT Chouf Minorities Association, which had its 4th edition in 2018.

In addition, the sotto voce dynamic has not prevented activists from participating in training activities and further developing their capacities at the national, regional or international level. The expansion of social networks also provides greater visibility to groups and organisations and helps to maintain a sense of closeness within the community, through the interaction and publication of activities on social networks.

These communication channels have been used to carry out awareness and promotion campaigns, such as the viral campaign #HomophobiaIsACrime and #StopArt489 of the MALI group (Alternative Movement for Individual Freedoms), which is launched annually on the occasion of the IDAHOT (Day International against homo, lesbo, bi and transphobia), or the #TenTen virtual campaign that celebrates the national day of LGBTIQ + people in Algeria. Initiated by three activists, this day is celebrated each year on October 10 since 2007. Activists and allies light candles and share photos of these candles with that hashtag as an act of solidarity in social networks.

On the other hand, in order to better frame and develop theoretical content, some groups in the region publish quarterly (or every semester) articles in attractive journals, with content on sexual diversity issues. Other groups manage to broadcast on web radios on issues related to the rights of LGBTQI + people, sometimes with the presence of experts and offering the possibility of asking questions live through Facebook.

The dynamics of networks, meetings, exchanges and regional trainings have allowed the emergence of several initiatives. Among them is Transat, a platform of trans activists, non-binaries and gender dissidents from North Africa and the Middle East, which capitalizes on a queer regional solidarity as a form of virtual resistance.

Several groups in the region are part of a strategic vision to reform the laws that affect LGBTQI+ people and are working on the issue through two main strategies. The first is to prepare reports to monitor violations of the rights of LGBTQI+ people. The second aims to occupy advocacy spaces, to encourage and channel pressure from the international community on national governments, including the Human Rights Council, Universal Periodic Review and the African [Commission] on Human and Peoples’ Rights.

In effect, the region knows of a real dynamic that overcomes the many existent restrictions. The best example is how the Egyptian queer community survived the repression of 2017, the effects of which are still palpable.

Activist groups carry out their activities despite very limited resources: only 0.001% of global LGBTIQ + funding goes to North Africa,8 while the region needs much more help to implement the changes desired by the community.

Nao Bouzid is a gay African feminist and an LGBTIQ+ activist from Morocco. He is the co-founder and the Executive Director of the LGBTIQ+ organization Equality Morocco. 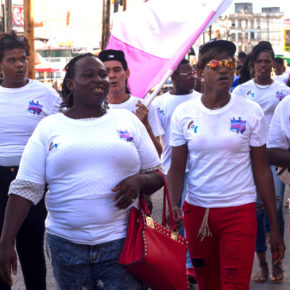