Chechen pop singer Zelim Bakaev, who is feared to have fallen victim to Chechnya’s anti-gay purge, has been missing for three months.

Vladislav Lobanov, a fellow at the Russia Office of Human Rights Watch, writes:

Tomorrow marks three months since the disappearance of Zelim Bakaev, a Chechen pop-singer. On August 8, at around 6 p.m., a group of security officials approached Bakaev in central Grozny, Chechnya’s capital, and dragged him into a car. There is little doubt he was targeted because of his sexual orientation. Chechnya, which local strongman Ramzan Kadyrov runs like his own fiefdom, is a place where people pay dearly for defying “traditional” norms.

Igor Kochetkov, one of the leaders of the Russian LGBT Network, told me that when Chechen authorities tortured gay men during the anti-gay purge earlier this year, some of the men said they had been questioned about Bakaev’s sexuality. Bakaev enjoyed some commercial success in Chechnya and was even photographed with Kadyrov. In 2012, he moved to Moscow to develop his singing career and, according to his friends, Chechen authorities received some reports about his “inappropriate” behavior there. After a few years away, Bakaev returned to Chechnya on August 6 for his sister’s wedding – and disappeared two days later. His mother filed a report with Chechnya’s police, but they found “no grounds” for opening a criminal investigation. She also wrote to Kadyrov, begging him to help find her son. All to no avail.

On September 24, two videos of Bakaev appeared on YouTube with Bakaev explaining, supposedly to a friend, that back in August he had left Russia for Germany. But Bakaev’s friends told us that he, “doesn’t look like himself,” in those videos: for a man who takes meticulous care of his appearance, he is ruffled, with a sloppy haircut, and seems to have lost a lot of weight. The furniture and other items in the apartment on the video also appear reminiscent of Chechnya, not Germany. Bakaev’s friends are convinced he was forced to record the videos by his captors, so that the authorities can deny his disappearance.

After a news conference last month on the persecution of gay people, Chechnya’s Prosecutor’s Office did reprimand local law enforcement agencies for failing to investigate Bakaev’s disappearance. But Moscow should go beyond window dressing, and properly answer questions about Bakaev’s fate and whereabouts. Germany could also help by publicly affirming that if Bakaev is in Germany, that he can safely seek asylum there, and will receive protection from German authorities to contact his family and speak publicly if he wishes. 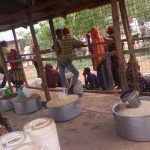