A life of rejection and isolation awaited Hervé after his arrest a year ago in Cameroon on homosexuality charges. With his case still unresolved in court, Hervé clings to a hope that someone will help him.

A year ago this month, Hervé was lured into a trap by an officer in Cameroon’s presidential guard.

Hervé was responding to a plea from presidential guard Wilfried Ella, who sought Hervé’s help in making peace with Ella’s girlfriend by explaining text messages the two men had exchanged. Because of those messages, Ella’s girlfriend suspected that Ella was homosexual. Ella asked Hervé to assure her that he was not.


But on April 4, 2016, when Hervé arrived to explain the situation, he was arrested.  He was held in police custody for nine days before he was released on bail.

The court case has been going on since then. Under Cameroonian law, homosexual activity is punishable by up to five years in prison.

Although the law as written only applies to people who are  caught in the act of same-sex relations, in practice it is often used to penalize people for being homosexual, even without evidence of any sexual activity.

But Hervé didn’t need to await court action before his punishment began. For the past year, his life has been miserable.

“Abandoned, threatened, traumatized, I cannot sleep. I’m even afraid to walk down the street …”.

That is how Hervé, age 26, describes his life today.

Family troubles began as soon as he was released a year ago. When he returned to the family home, where he lived, his father interrogated him about why had been arrested. Hervé told his father the truth.

His father was distraught that his son was attracted to other men, but he wasn’t content merely to express his displeasure with harsh words. No, he tore up all of Hervé’s school diplomas, which Hervé had relied upon to prove his qualifications for a good job.

The father then ejected Hervé from the family home.

Eventually he found shelter at the headquarters of the LGBTI rights group Humanity First Cameroon, which had been following his case.

Through them, Hervé was invited to the Embassy of the United States, accompanied by Humanity First’s human rights officer. A political attaché there was reassuring, telling Hervé about the process of seeking asylum in the United States and promising to help him raise funds to assure his  safety.

Hervé was eager to leave the homophobic society of Cameroon, where he is considered a pariah.

However, nothing came of that embassy visit, though Hervé still hopes that someone there, somehow, will come to his aid.

Eventually his allotted time at Humanity First headquarters came to an end.  The group’s human rights officer, Raphael Dou’a, then offered to host him at home.

Hervé’s trial is still ongoing. A hearing was scheduled last month, but complainant Wilfried Ella had responsibilities that day as a presidential guard, so the hearing was rescheduled to later this month, according to attorney Jathan Ndongo, who is representing Hervé.

While he awaits a decision on whether he will be sentenced to prison, Hervé meanwhile has no job and no financial resources.

He is unable to resume his education as a botany student at the University of the Mountains in Bangangté.

He is depressed and anxious. When he walks outside, Hervé thinks that people are following him. But he still clings to the hope that he will somehow receive financial assistance so he can resume his studies, either in Cameroon or abroad. Or, if that doesn’t happen, he hopes he will be able to find asylum in another country.

Erin Royal Brokovitch, the author of this article, is an LGBTI rights activist in Cameroon who writes under a pseudonym. 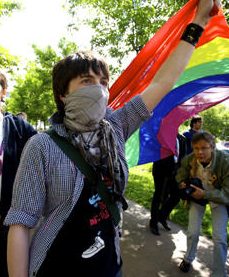