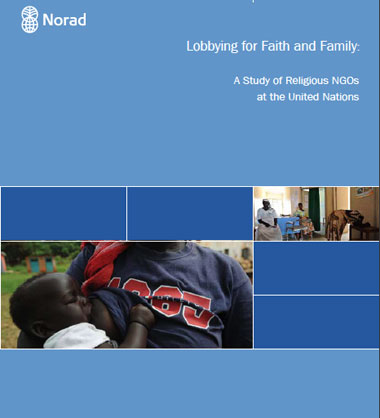 Faith-related organizations that favor sexual rights and human rights (SRHR) have an ally in the Norwegian Agency for Development Cooperation (Norad).

The agency last week discussed its support for faith-based pro-rights groups as part of an international pro-rights  network that it hopes to nurture  in the wake of its newly published report on faith-based organizations that oppose rights related to sexuality, especially for women, youth and sexual minorities.

The Norad report, “Lobbying for Faith and Family: A Study of Religious NGOs at the United Nations,” describes the strategies and beliefs of “pro-family” religious lobbyists, especially 16 organizations, including the Catholic Church, the Catholic Family and Human Rights Institute (C-Fam), James Dobson’s Focus on the Family, Sharon Slater’s Family Watch International, and the Muslim- and Christian-backed Doha International Institute for Family and Development, based in Qatar.

Those organizations make a “basic pro-family argument … that the traditional (American) nuclear family is under threat with severe consequences such as destabilisation of a biologically natural and God-given gender balance, decline of social and moral order and the loss of male authority,” the report says in summary.

In general, the report states, “They are effective at reaching out to member states on pro-family values and against a liberal SRHR-agenda. Their long-term aim is to build a permanent pro-family bloc among conservative member states from Muslim and developing countries.

Conclusions of the report include the following:

The study showed that the most active organizations are American, they are working with a mixture of religion and politics, and politically belong to the right wing of the Republican Party in the U.S. They have largely originated from Mormon, evangelical and Catholic groups, and work closely with the Vatican. In addition, they work together with Muslim countries and organizations, and small Catholic countries.

They develop material and arguments that can be used in the UN negotiations, and that promote so-called “family values”, which is largely concerned with avoiding language on sexual and reproductive rights, as such rights in their opinion means promoting abortion and homosexuality. These organizations are very professional in their methods and strategies, and therefore manage to have great influence, even though they do not really represent very large groups of people.

In a follow-up meeting about the report, Norad reportedly emphasized that it is not opposed to religious groups, and that it seeks to work with those that share its concerns for sexual rights and human rights.

Coordinator of the Norad-backed network of civil society partners, researchers and others is Camilla RavnsborgAschjem (camilla.aschjem @ norkr.no) of the Christian Council of Norway.