Internet celebrity Shakiro, a transgender victim of discrimination and anti-gay stigma, has incurred criticism from many LGBTI Cameroonians by publicly outing more than a dozen allegedly gay local celebrities. She has now apologized for making those accusations even as she continues to denounce the ill treatment she suffered during her time in a Cameroonian prison last year.

Shakiro is a young Cameroonian who identifies as a woman — “a woman in the skin of a man”. She is also an online celebrity with a variety of Facebook pages where she demonstrates her beauty products and advocates for LGBTI rights.

Those Facebook pages include a new one, Shakiro Original, launched in July, that already has more than 22,000 online followers,

A graduate of the University of Buea, she is fluent in French and English. Her birth name was Loic Njeukam.

Due to her appearance and sexual orientation, she has repeatedly been the victim of homophobic physical and verbal abuse. She also has been arrested, most recently in May 2021, which earned her a five-year prison sentence for “attempted homosexuality”.

While she was incarcerated, she suffered verbal and sexual abuse, which was aggravated by the indifference of prison staff, she said.

“I was insulted by fellow prisoners every day,” she wrote on Facebook. “If I really am a gangrene for society, my place was not in prison, but in a mental asylum.

“Sending Shakiro to prison in an environment where homosexuality is practiced the most. Victim of rape repeated many times by filthy bandits…

“I collapsed when I was sentenced to five years in prison. The same Cameroonians who spent the time sharing my videos and encouraged me to be myself, you had to see the mockery,” she stated.

After several months behind bars, she was released pending an appeal of her sentence, which was won for her by Cameroonian gay-rights advocate Alice Nkom with support from national and international organizations such as Human Rights Watch.

After prison, she still was the target of homophobic and transphobic insults, especially on the Facebook pages where she displays her femininity.

Society mistreats her for something she didn’t choose to be, Shakiro protests.

“Being homosexual is not a choice,” she wrote. “How can you choose to be homosexual in a world that exposes you to so much hatred?… It’s a bit like choosing to be born black in a society infected with racism.”

Frustrated, Shakiro took the controversial step of “outing” local celebrities. On July 24, 2022, in a live video (later deleted) on her Facebook page, Shakiro listed the names of about 10 alleged homosexuals. Most of those named were young bloggers and online influencers. None of them had previously been publicly identified as gay.

She followed up a few days later with another list, this one made up of six Cameroonian musical artists.

Many people objected to Shakiro’s revelations. Some people noted that there’s no evidence that the people cited are gay, such as being part of Cameroon’s LGBTQIA community. Other stated that, even if they are, Shakiro had no right to name them publicly.

After all, being identified as LGBTI in Cameroon puts people at risk. Article 347-1 of the penal code stipulates that sexual relations between people of the same sex are punishable by imprisonment ranging from six months to five years and a fine of 20,000 to 200,000 CFA francs (about U.S. $30 to $300).

A few days after making her claims about the sexual orientation of the 16 celebrities, Shakiro apologized with these words:

“I sometimes made mistakes, and I beg your pardon. I was young, naive, and badly surrounded. Many people took advantage of me and abused my generosity and notoriety. I forgive them because Shakiro decided to be reborn; because I couldn’t get stuck on the abuse experienced in prison and outside of prison (beatings, insults, slander). I decided to be reborn to move forward to be the child prodigy that my recently deceased dad wanted so much. Dad, I love you, and I miss you so much.”

The extent of damage to herself and the community is still being assessed.

Ghislain J. Nkontchou, the author of this article, is a human rights activist from Cameroon who is currently a graduate student in international affairs at Baruch College in New York.  He is a contributing editor for Erasing 76 Crimes. 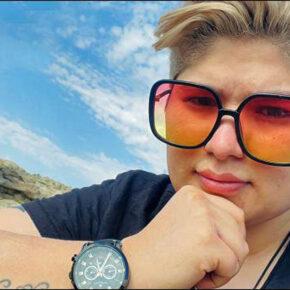