The Ugandan government has issued a national Identification document to Cleopatra Kambugu, a transgender woman, clearly identifying her as a woman, in what is believed to be a first in the country.

Officially, Kambugu is Uganda’s first transgender citizen, a great milestone for the LGBT community and human rights activists in Uganda.

Cleopatra told The Continent that she was not sure what awaited her when she got notification that her National Identification card was ready. But under “Sex,” she found an “F,” a confirmation of her female identity by the state.

“It is not my win. Its the community’s win,” she says.

The win gives a modicum of protection to transgender and gender non-confirming Ugandans. Currently, the Ugandan law that creates the National Identification and Registration Authority (NIRA), the Registration of Persons Act 2015 only recognizes Ugandans as either male or female.

Anyone who was gender-non-conforming could be fined or jailed for allegedly giving a civil servant “false information.” This has pushed many transgender women and gender-non-conforming persons beneath state protection. During the COVID-19 lockdown in 2021, transgender persons had difficulty accessing state support and food due to lack of national identification cards.

The fear of getting national identification cards among transgender and gender non-conforming Ugandans has fuelled violence by some state security agencies, including sexual abuse, molestation, and ridicule in lawful custody. Transwomen and transmen still share prison cells with male inmates.

Without a valid national identification card, it is difficult or impossible to access jobs, housing, education and banking.

On some occasions Kambugu says she has had to strip for police officers to prove she is really a woman. Her passport read male, yet she was a woman.

Uganda just recognized her first transgender citizen n am that girl👑🥂.
I have asked myself if the sun shone differently when the history we read about was made. But today as history was made, the sun shone the same, even as the skies were bluer, but Ugandans just went about their day as any other.
One day it was monumental for the first black slave be registered as a legal citizen, it is not any more.
Today it is monumental that my country chose to register me as a woman recognising me as a transgender woman not some deluded “boy”. My prayer is two fold, that this win will be a win for other trans Ugandans and that one day it should not be special for a trans person to be recognized by her country. I made it, we made it.

The Global Fund for Women tweeted congratulations to Kambugu:

Trans people are fighting for official recognition all over the world. Congratulations to longtime partner & #LGBTQI advocate Cleo Kambugu (@cleo_xulaye) on her new Ugandan ID card, which accurately reflects who she is.

Great Milestone worth a celebration. This is not a win for just @cleo_xulaye but the whole transgender community and the LGBTQ community at large in Uganda.

Cleopatra is currently the Director Programs at the East African Sexual Health and Rights Initiative (UHAI EASHRI), an indigenous activist fund that supports the sexuality, health and human rights of minority groups.

She is a renowned human rights activist with a bachelo of science in agriculture from Makarere University, who advocates for amplified discussion on gender and sexuality in spite of the stigma associated with it.

She began to question her given identity during her studies at university and at the age of 23, she became part of the LGBTQ community in Uganda.

Despite the National ID card win, Cleopatra says LGBTQ persons in Uganda still have many more battles to fight.

“When you present your self as a trans-person in the public, you get policed, are you woman enough? It helps that I do pass and I have had surgery. What if you don’t pass?” she wonders. 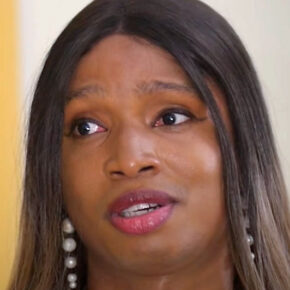