The actress, who is popularly known as UK, went on Instagram to preach against same-sex relationships.

The 56-year-old divorcee who declared she is an evangelist in 2018, shared a video of herself referencing various Bible verses to justify her hate-filled messages in a sermon she titled “I SHALL ARISE.”

In the video which has now been seen more than 6,000 times by her more than 500,000 followers, the actress described LGBTIQ+ people as “confused” and “demonic.”

In her sermon, she claims that people with same-sex attractions are demon-possessed and disgusting and therefore should be rebuked.

She also claims that she was approached by a female lesbian colleague but turned down her offer because of her strong Christian faith.

“I remember years ago, I don’t wanna mention names for security reasons. A senior actress, an elderly actress even approached me that she wanted to love me. That she wanted to kiss me. And I was looking at her like very disgustingly, she looked to me at that time and still to me. But because I had gotten to know God, I had gotten to be imbued with the words of God. And I am keeping my salvation with fear and trembling. I told her sorry ma’am, I will not and can never engage in such demonic act because God did not say that a woman and a woman should be kissing and be romancing,” she says.

Anunobi is not the only Nigerian actor or actress who has shown their homophobic side. Actors such as Chinedu Ikedezie, Charles Awurum, and Adam A Zango have all promoted anti-LGBTIQ+ messages publicly. These messages increase the danger to LGBTIQ+ in a social context that is already very hostile toward queer people. 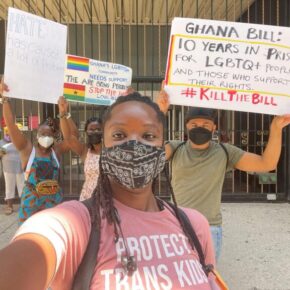