To help Abigail, make a U.S. tax-deductible donation via PayPal, Facebook or GoFundMe. The St. Paul’s Foundation will devote all those donations to assisting Abigail.

Abigail is four months pregnant, carrying a child conceived late last year when three young men insulted her for being a lesbian, then raped her. (For her safety, real names have been replaced with pseudonyms in this article.)

Before the rape, Abigail, 28, had been living peaceably with her partner, Isabelle, 24, supporting herself with a small business selling fruits, candies, cookies and cigarettes.

The couple rents a modest room in the city of Mbalmayo, about 30 miles south of Yaoundé, the capital of Cameroon. They left their parents’ homes a while ago in order to live together. Their parents do not know about their sexual orientation.

Abigail’s troubles began when she was returning home from work at around 8 p.m. on Dec. 28, 2020.  Three young men whom she did not know blocked her way and insulted her with derogatory terms for lesbians.

Shocked by their language, she protested. They knocked her to the ground, tore her miniskirt and dragged her to an abandoned house at the end of the street. The three men stripped her and raped her in turn, using no protection.

They stole her wallet and phone before they abandoned her, naked.

After a few hours spent in agony in the vacant building, she made her way home. Isabelle quickly took her to a health center where she was given post-exposure HIV treatment.

Abigail complained to police, who investigated the rape but failed to identify any of the rapists.

Several weeks later, Abigail discovered that she was pregnant. She tried to get an abortion even though abortion is illegal in Cameroon. It was unsuccessful. The doctor warned her that if she tried again it could kill her.

She has reconciled herself to having the baby and taking care of it, but she is worried about how to pay the expenses of pre-natal care and of raising a child.

Recently Abigail spotted one of the rapists visiting her neighborhood, but decided not to report him to police for fear that she would end up arrested for homosexuality.

She had to abandon her business and use funds from it to pay for first aid and other medical treatment after she was raped. That depleted her business inventory.

Now she hopes to resume selling her wares. To rebuild her inventory of fruits, candies, cookies and cigarettes, she needs 200,000 CFA francs (about US $370).

The St. Paul’s Foundation, the financial sponsor of Erasing 76 Crimes, is raising money for Abigail. Please make a U.S. tax-deductible donation via PayPal or Facebook, which pass along 100% of donations, or via GoFundMe, which deducts a processing fee of about $2.20 per $100 donated. 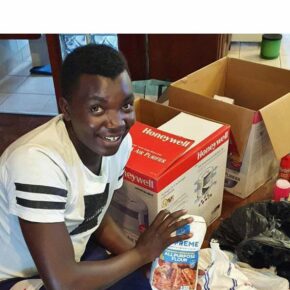