Police at the Kakuma refugee camp in Kenya used tear gas today to break up a protest by about 60 LGBT+ refugees who assembled despite the country’s Covid-19 lockdown.

The protesters, who were staging a sit-in outside the offices of the U.N. refugee agency (the UNHCR), sought quick relocation to a tolerant Western country and improved security within the huge and generally homophobic Kakuma camp.

They had been warned by the UNHCR and others that their gathering was putting their own health and that of others at risk.

“After several efforts over the last three days by UNHCR, the National Police Service and the Refugee Affairs Secretariat to resolve peacefully a sit-in protest outside the UNHCR’s office in Kakuma, Kenya, and offer realistic solutions to the 60 refugees and asylum seekers involved, they were moved today by the Kenyan Police.

“As the group refused to return to their shelters and, the situation was tense, and the Police used tear gas. Nobody was seriously injured. Eleven refugees sustained minor injuries and were immediately taken to hospital, where they received treatment and were discharged.

“The majority of the group were transported by the Police back to their shelters.

“In order to address the group’s security concerns, the Police have announced enhanced measures in the area where they reside in the camp, including a security helpline number through which incidents can be reported 24/7.

“UNHCR has offered additional counselling to individuals within the group who may wish to discuss personal concerns. We urge all concerned to show restraint at this challenging time and to respect all measures put in place by the Government of Kenya to fight the COVID-19 pandemic and protect the health of all refugees and host communities.”

“The refugees were clearly well-funded and well organized in their protest, wearing uniform rainbow masks in delivering their messaging…. You will also notice that UNHCR never refers to the group as LGBTI in their statements, obviously due to security and privacy concerns, but that the group itself chooses to protest exposing their sexuality to the public and others in the camp. Some may see this as courageous, others may see it as provocative. For any human rights organizations concerned with the focus being security and resettlement this is a very difficult and complex milieu to navigate, when these issues come up.

“As Executive Director of African HRC I note that this could have been a lot worse, given the volatility of the situation. Knowing the police in Kenya this is actually a measured response as it could’ve been a lot worse. AHRC reiterates the importance of following camp rules and Kenyan laws, especially at a time like this. While we respect the right to protest, I want to repeat that during this pandemic the collective good of all must be taken into account and that includes the respect and well-being of the several hundred LGBTI refugees who refused to protest along with the smaller group, as well as considering the health and CoronaVirus related measures that impact all 200,000 refugees in the area. We are pleased special measures have been put into place to reassure those concerned with security.” 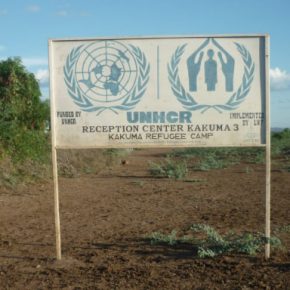