In a rare change of heart, Ugandan local government and security officials have issued an official travel permit to an LGBT organisation to distribute antiretroviral drugs (ARVs) during the countrywide COVID-19 lockdown.

Joseph Kawesi, the executive director of the Come Out Post Test Club  said Saturday in Kampala that  local government officials and representatives of Ugandan President Yoweri Museveni had issued him a permit to travel and distribute ARV medications.

“When  I am stopped at roadblocks, I show them the permit and they (police) let me through,” Kawesi said.

He currently is distributing medicines by bicycle, motorcycle and car.

The names of the officials who gave him their approval are being withheld here so they will not be publicly smeared as sympathetic to homosexuals.  Many Uganda government officials believe that homosexuals are evil and deserve to die of HIV/AIDS, despite UNAIDS’s caution that allowing HIV to spread in LGBT people can create a bridge in new infections in heterosexuals.

COPTEC-Uganda works on behalf of transgender-diverse communities for recognition of their human rights, seeking an end to discrimination, stigma and exclusion and seeking to empower them to live meaningful lives.

The group’s goal is a community that both supports and cares for transgender women sex workers  who are living with  HIV and is well enough informed to protect itself from HIV/AIDS-related illness by:

Many organisations, including the LGBT-friendly legal aid group  Human Rights Awareness and Promotion Forum (HRAPF)  and the Right Here Right Now Platform, a coalition of 14 local civil society organisations, have reached out to security agencies and other officials to urge them to relax security restrictions, including LGBTI, without discrimination. 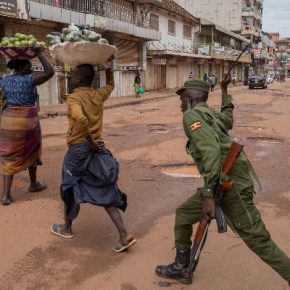