The apartment of a lesbian rights activist in Cameroon was burglarized last month after a disgruntled neighbor accused her of being too masculine. Her landlord then threatened to evict her, telling her he didn’t want to rent to a lesbian.

The troubles began around 9 a.m. Oct. 18 in the Nkoabang district of Yaoundé. The dispute was triggered by a disagreement over the shared use of a clothes dryer.

Rita (a pseudonym) was threatened by her homophobic neighbor Jack (also a pseudonym), who took offense at her apparent sexual orientation. He roused the neighborhood with insults, declaring that Rita must be a lesbian because she has a “masculine” physique and lives without a man in her life.

RIita is a defender of the rights of LGBTI people in Cameroon. For years, she has been a member of the Lady’s Cooperation advocacy group, the first organization in Cameroon working on behalf of lesbians.

Notwithstanding Jack’s insults, Rita proceeded to set about her ordinary tasks that dy — supporting lesbians at Lady’s Cooperation, accompanying HIV-positive people to their medical appointments and going to her own appointment with her cardiologist.

When she returned home around 6 p.m., she found her home vandalized and ransacked. Her USB keys and computer had been stolen along with documents about current and future projects of Lady’s Cooperation. A photo of her and her girlfriend had also vanished. Rita cried for help, but no neighbor responded.

The next morning when she emerged from her home, an aggressive mob confronted her. They insulted her and commented about her lifestyle and her alleged homosexuality.

She filed a complaint at the local police station.

Next, her landlord showed up and demanded that she leave his building because he didn’t want a lesbian living there. He told her to move out as soon as possible. He gave her no time to find another place to take shelter.

Rita currently is sick, vulnerable and threatened with eviction, seeking help from wherever she can find it.

This article was revised Nov. 15 to reflect the fact that Rita has been threatened with eviction but currently is not homeless. 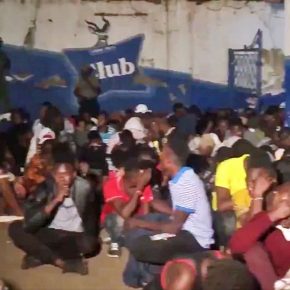