In northern Cameroon, two lesbians were arrested by Garoua police and forced to pay 300,000 (about U.S. $514) to regain their freedom.

It was September when police in Garoua surprised two women in their twenties who were making love on a vacant street.

Kaika, age 25, no longer attends school and has no career. Akan, age 29, is a businesswoman in Garoua. (Both names are pseudonyms.)

The two women have been dating for a while and live in different parts of the city. On the night of their arrest, they arranged to meet in the city’s entertainment district, visited  several night clubs, BS then retired to an abandoned street for sex.

A passing police patrol heard their cries of passion and arrested them.

The two women were taken to the police station and put in cells in preparation for their transfer to the prosecutor’s office and then to the Garoua prison to await trial for homosexual activity.

To avoid prison, the two women chose to negotiate with the police, who agreed to release both of them in exchange for 300,000 CFA francs (about U.S. $514).  They began making phone calls to their network of friends.

After two days, they had collected the money and were allowed to return home. Police warned them to break off their relationship or risk further trouble with the law.

The author of this article comments:

LGBTI citizens of Cameroon must take care to exercise their civil and sexual responsibilities. If they do not, they risk running afoul of the law.

By behaving in an exemplary manner LGBTI people show that they deserve society’s respect instead of being objects of scorn.

Steeves Winner, the author of this article, is an activist for LGBTI rights in Cameroon who writes under a pseudonym. Contact him at steeves.w@yahoo. 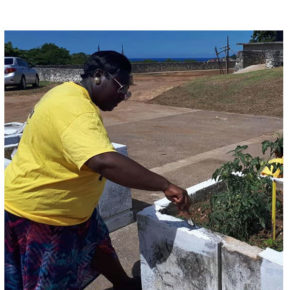