Leadership training for 15 LGBTI rights activists was the focus of the first session of the new Caribbean LGBTI Leadership Academy. Activists from Belize, the Dominican Republic, Guyana, Jamaica, Suriname and Trinidad & Tobago attended the training sessions in Guyana on Sept. 14 to 16.

The first of its kind in the region, the Academy, hosted by the regional LGBTI network, Caribbean Forum for Liberation of Genders and Sexualities (CariFLAGS), endeavours to strengthen emerging LGBTI leaders through two tailored residential training programmes in Guyana and Suriname, online sessions between workshops, as well as coaching and mentoring with existing Caribbean human rights leaders.

Dane Lewis, CariFLAGS’ Regional Programme Manager from Jamaica, noted in his opening remarks that “in many spaces capacity is still maturing and organizational infrastructures are loose and so this is an opportunity to ensure that the next wave of leaders address many of the things we learnt while doing from now in preparation for their new roles.”

In his charge to the Academy, Dr. Douglas Slater, Assistant Secretary General for Human and Social Development at the Caribbean Community (Caricom) Secretariat and a former Minister of Health in St. Vincent and the Grenadines, identified every participant of the workshop as being a ‘Champion of Change.’ The Pan-Caribbean Partnership on HIV and AIDS (PANCAP), which Slater oversees, had just days before re-launched its Champions for Change initiative with 16 Caribbean persons being awarded with the prestigious title, including CariFLAGS’ Co-Chair Lucien Govaard from Suriname and Managing Director of the Society Against Sexual Orientation Discrimination (SASOD) Joel Simpson from Guyana.

Dr. Slater reflected that “to achieve change will require hard work, optimism, boldness, team work and the ability to inspire and motivate others to become leaders. Encouraging others to become leaders will be important in ensuring a sustainable flow of leadership to continue and effect change.” Discrimination, he noted, has prevented the world from recognizing and celebrating the humanity of individuals based on commonalities rather than differences.

At the closing ceremony, the participants were encouraged by the lead facilitator, Martha Carrillo of Belize, to ensure they remain focused and committed in order to complete the required credit hours for successful completion of the programme. SASOD’s Joel Simpson thanked the Caribbean Vulnerable Communities Coalition (CVC) for supporting the CariFLAGS vision of the Caribbean LGBTI Leadership Academy to rejuvenate and replenish community leadership in the region, and strengthen and revitalize CariFLAGS as the pan-Caribbean LGBTI network across language barriers.

CVC’s Monitoring and Evaluation Officer, Kristina Mena, said that, “CVC is a proud partner of CariFLAGS and endorses its flagship programme, the Caribbean LGBTI Leadership Academy, which is building the capacity of the next generation of leaders, who are committed to challenging barriers and creating a world of inclusion and equality.”

“I like this process of coming from within then moving outwards. This helps us to understand ourselves and each other and makes us better leaders to our communities,” said Rosalba Karina Crisóstomo from the Dominican Republic in Spanish. In closing, Lucien Govaard, CariFLAGS Co-Chair, charged participants to stay connected and engaged in order to capitalize on the milestone achieved thus far. 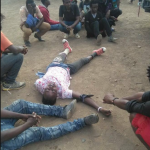