A Cameroonian LGBT rights activist was detained in Bafoussam on Feb. 11 and told to pay for his release. The president of the LGBT rights group Avenir Jeunes de l’Ouest, (here called F.) had traveled to Bafoussam   seeking the release of a gay man who had been arrested there six days earlier.

F. had been called to Bafoussam by the local prosecutor to deal with the case of Alex, 32, who had been arrested Feb. 5.

The police commissioner in Bafoussam had demanded 60,000 CFA francs (about 91 euros or US $97) to release Alex.  Instead, however, Alex was released through intervention by gay-friendly lawyers Alice Nkom and Jathan Ndongo.

In Cameroon, same-sex relations between adults are punishable by up to five years in prison. Law enforcement officials frequently consider homosexuality, rather than same-sex activity, to be grounds for prosecution.

The news of Alex’s release arrived on Saturday, Feb. 11, soon followed by the news that F. had been detained.

That morning, F., who lives in Dschang, had received a phone call from Bafoussam prosecutor Simplice Y. Ngoumou Manga, instructing him to travel to Bafoussam to meet him. When he arrived at the home of the prosecutor, Ngoumou Manga demanded that F. give him 100,000 CFA francs (about 152 euros or US $161).

Ngoumou Manga claimed that he had intervened with the police commissioner to set Alex free.

F. refused to pay, saying that he did not have the money. That angered the prosecutor, who took F.’s national identity card and locked him up in his home.

He threatened to detain F. until the money was paid.  He then left the house, leaving F. locked in.

A second member of Avenir Jeunes de l’Ouest was also in Bafoussam. He helped F. escape from the house while the prosecutor was away.

Two days later, F. received a phone call from the prosecutor, who told him that he had sent F.’s  national identity card back to him. He asked F. to forget what happened and promised to be helpful in the future. He reassured F. that no charges would be filed against Alex.

Erin Royal Brokovitch, the author of this article, is an activist for LGBTI rights in Cameroon who writes under a pseudonym. 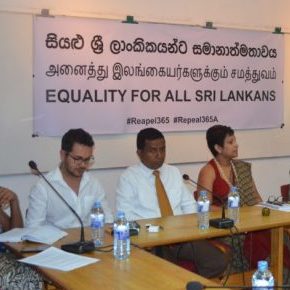