Rizi Timane, a Nigerian-born transgender life coach, singer/songwriter and author, now naturalized in the United States, speaks about his life and struggles as a transgender person. 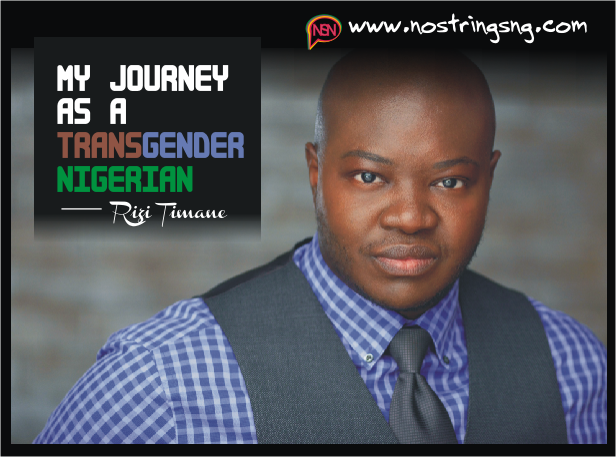 Rizi Timane was assigned female at birth, but at age 8 he came to realize that what he felt inside did not match how he looked on the outside. He became depressed.

He lived part of his life as a tomboy and as a lesbian. But this did not still reflect how he truly felt, as he knew that he was a man.

In an exclusive interview with the Nigerian LGBTIQ podcast NoStrings, Rizi revealed everything there is to know about his growing up in a strong religious family who at first did not accept his decision to transition fully and to live life freely as a transgender person. He said:

“They brought in several religious persons to conduct exorcisms on me, and to deliver me, as they thought that I will go to hell if I continued to live the way I was living.”

Rizi also addressed the issue of transgender people’s rights to use public bathrooms.

“Using the bathroom is a human right, and I don’t see any danger or any harm in people using the restroom. So I say yes to gender-neutral bathrooms,” he said.

Rizi also spoke about his book titled “An Unspoken Compromise,” which became Amazon’s bestselling memoir under the Lesbian and Gay category. He said, “The book was my opportunity to share my story of growing up in Africa and being a transgender, of reconciliation between my family and I. That was really the main point of the book”

To know more about Rizi Timane, and how you can help him continue to support the transgender community, visit  www.rizitimane.com.