Third of four articles about the treatment of LGBTI people in Zimbabwe. 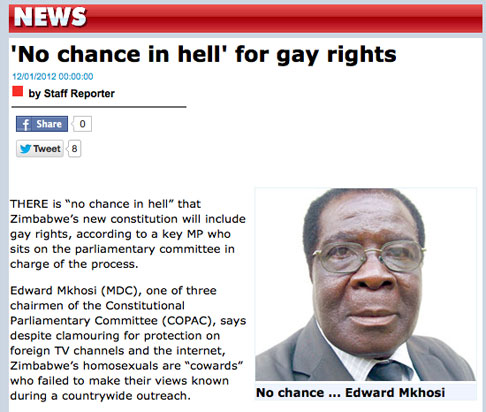 “The media in Zimbabwe contributes to and exacerbates public prejudices against LGBTI individuals by, for the most part, portraying homosexuality as linked to violence and crime.”

The report focuses on the media’s promotion of “three main myths about homosexuality that have contributed to violence, harassment, and discrimination against LGBTI individuals”:

“This has been particularly damaging in the context of the constitutional reform process, as it has led to the justification of excluding LGBTI concerns and representatives from the political space. It also likely fuels violent harassment as it generates fear in the general population.”

Myth 2: Homosexuality as a Western import

“Second, many articles are characterising homosexuality as a Western construct—a “behaviour” that is inherently against Zimbabwean culture and national pride, and that has been promoted by the West as part of a neocolonialisation process.

“This argument is particularly effective in justifying the exclusion of LGBTI concerns and representatives from the constitutional reform process, because the process itself is the first constitutional reform to be undertaken since the signing of the global political agreement, and political leaders have an interest in fuelling a perceived need to exclude foreign elements from the process.”

The report adds: “It is ironic that many of the very provisions in the Criminal Law that are used to punish and discriminate against LGBTI individuals are, in fact, Western
constructs—inherited from the British colonial powers—whereas sexual
orientation and gender identity are known in all modern science to be part of
an individual’s most intimate sense of self.”

“Third, the media has seized upon the fact that both major political parties to some extent are using homophobia for political mileage. However, instead of defending the equal rights of all Zimbabweans, regardless their sexual orientation and gender identity, the media often portrays LGBTI individuals themselves as politically divisive and, through their very identity, seeking to destabilise the political process.”

In addition, the report said, Zimbabwe’s news media sometimes produces ” ‘news’ stories that appear to have little basis in reality.” It cited this example:

In August 2011, ZBC news reported the arrest of a 55-year-old white man being arrested with 4 Zimbabwean male “accomplices” in Borrowdale on charges of “sexual immorality.” The men were arrested after a shop owner saw some of them spending money in an
“unusual manner.” The men were held at Domboshava Police Station in Central Harare, and no further reports on the case were obtained.