Roman Catholic Bishop Gabriel Malzaire in the Caribbean island nation of Dominica has joined forces with conservative Christians opposing a move to overturn the country’s anti-homosexuality laws. He had previously supported efforts to repeal such laws.

Subscribe for free to stay up-to-date on LGBTQ+ rights

Back in 2013, Bishop Malzaire wrote in support of a Vatican statement opposing laws that criminalize sex between same-sex partners.

These are excerpts from an article in the National Catholic Reporter about the court action:

In 2013, Malzaire wrote in an opinion article for the website Dominica News Online that the Catholic Church in the Caribbean island nation supported the Vatican’s 2008 statement to the United Nations. The Vatican statement condemns “all forms of violence against homosexual persons” and urges “all States to take necessary measures to put an end to all criminal penalties against them.”

Dominica is about 82% Christian, according to the Association of Religion Data Archives.

The Dominica Christian Council has a duty to promote Christian values and oppose any legislation that “challenges, opposes and/or is likely to degrade these values and beliefs, public decency and/or public morality,” the bishop wrote in the affidavit.

“The Christian values concerning sexuality, the family and the sanctity of marriage are no exception,” Malzaire wrote. “It is in this vein that the Applicant [the Dominica Christian Council] wishes to be heard.”

The court case began in 2019 when a gay man in Dominica, who has remained anonymous for his safety, sued to challenge several sections of Dominica’s Sexual Offences Act in the Caribbean island nation’s High Court of Justice.

The Canada-based HIV Legal Network, which is one of the groups supporting the claimant, said in a press release that these sections of the law have effectively turned all LGBTQ people into “presumed criminals.” Their precarious legal status makes them vulnerable to extortion, harassment and physical violence, according to the network.

A local LGBTQ advocacy group, Minority Rights Dominica (MiRiDom), has called for an end to the criminalization laws.

“Homosexuals are not requesting special rights, but merely to be respected as human beings,” said MiRiDom president Daryl Philip in a Nov. 26 presentation on the nation’s Sexual Offences Act. Philip said in the presentation that it was important for the bishop to speak out against the criminalization of adults for consensual sexual acts, because of the stature of the Catholic Church in Dominica.

Because LGBTQ people are considered presumed criminals, the nation’s police often refuse to help them when they are harmed, said Tomlinson, who was born in Jamaica and moved to Canada after receiving homophobic death threats in his own country. He has worked on legal cases defending LGBTQ rights in Dominica, Jamaica and Barbados and conducted police sensitivity training in Dominica.

Police say LGBTQ people “are causing this upon themselves, because they are engaging in an illegal activity,” Tomlinson said. “[They say] ‘What do you expect — the society doesn’t like homosexuality, so you must expect that they’ll attack you.’ ”

A 2018 Human Rights Watch study on LGBTQ rights in Dominica and other English-speaking Caribbean nations found that many respondents had experienced harassment from the police themselves. One trans woman from Dominica told researchers she had experienced various physical attacks due to her identity. When she went to the police, she said, they did nothing.

“[Instead] they make fun of me,” she told researchers. “I’m not taken serious at all.”

… The island has around 72,000 residents, according to the CIA World Factbook, of whom about 61% are Catholic. 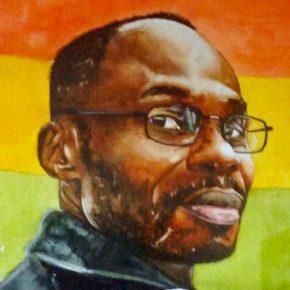