An award-winning actor, stage director and film producer, Naga was named a UNICEF Goodwill Ambassador in 2007. He has spoken out on many sensitive social issues, including HIV/AIDS, female genital mutilation and children’s rights.

Egyptian actor and UNICEF goodwill ambassador Khaled Abol Naga restated his support for gay rights on Twitter, writing that denying the rights of homosexuals to be recognized by society is exactly the same as racism.

“Gay people are born with romantic tendencies toward the same sex and this is scientifically documented now, just like the roundness of the Earth. Ignorance of these facts is what society lacks to understand what homosexuals are suffering,” he added.

Naga put on the rainbow logo, representing the gay and transgender (LGBT) movement, on his Facebook profile picture, inciting accusations that he himself was homosexual.

In this move, Naga became one of the first Arab celebrities to openly declare their support for the LGBT movement.

Many public figures and presenters attacked Naga at the time for his announcement.

“What Khaled Abol Naga did is not in line with the traditions of the society,” said TV host Wael al-Ibarashy.

In response to the backlash, Naga wrote on Twitter “If only people give love the chance it deserves, Good will prevail. I only wish God blesses us all to comprehend the diverse rainbow of love.” 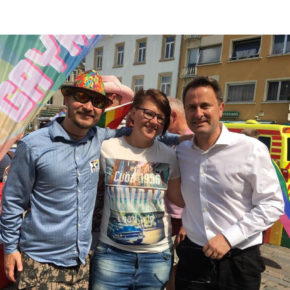