An ongoing campaign against homosexuality has erected banners and posters  to spread its homophobic messages of anti-LGBT hate and rejection in Cameroon.

Since 2012, the Movement of Young Cameroonians has targeted LGBT people, declaring August 21 as a supposed World Day Against Homosexuality.

The organization, known by its French name — the Rassemblement de la jeunesse camerounaise, or RJC — hopes that its annual homophobic celebration won’t be limited to Cameroon but will extend worldwide. There has never been any evidence that the group’s ambitious goal is anything other than a homophobic dream.

The association claims that a World Day Against Homosexuality is needed because of “the law, common sense, the Bible and African traditions.” In a more detailed explanation, the RJC tells about a 12-year-old crime that Cameroonian journalist and RJC leader Sismondi Barlev Bidjocka says occurred in Yaoundé, the Cameroonian capital. He claims, with no evidence at all, that homosexuals attack opponents of homosexuality in the same manner that a young man was killed on Aug. 21, 2006:

“In view of the law of the Republic of Cameroon, the Holy Bible, the need to preserve the human species, serious harm done to humanity, to our traditions, in our African culture in general and Cameroon in particular, homosexual excesses observed throughout the world, their propensity to turn into executioners of people who condemn their behavior — the rape and murder of young Djomo Pokam who was sodomized and murdered by homosexuals who threw him from the eighth floor of the Hilton Hotel of Yaoundé, on August 21, 2006.”

In the past, the RJC has encouraged violence against LGBT people. Participants in their 2013 march carried signs stating:

At the time, Sismondi Barlev Bidjocka claimed that an anti-gay RJC vigilante brigade patrolled the streets of Yaoundé every weekend, hunting for homosexuals.

Gay-friendly attorney Alice Nkom challenged the RJC in a televised debate with Sismondi Barlev Bidjocka in 2012.

In the debate, Nkom declared:

“Rights are universal and homosexuals are not animals, therefore they have rights and should be respected as all other citizens. Homophobia has no place in this changing world. Homosexuality is not an imported practice; what’s imported is the repression of it.”

In 2016, Sismondi Barlev Bidjocka used radio and television broadcasts to advocate for harsher punishments for homosexual activity. Under Article 347-1 of the Cameroonian penal cod, homosexual activity is punishable by up to five years in prison, but the law is often imposed much more broadly, subjecting people to arrest and imprisonment if they appear to belong to a sexual minority, even with no evidence of sexual activity.

In advance of a further RJC protest that might occur on Aug. 21, the RJC has installed anti-LGBT posters and banners at several intersections in Yaoundé, bearing threatening messages hatred and rejection of sexual minorities.

Sismondi Barlev Bidjocka also has a radio show at 105.7 FM in Yaoundé. On it, he rails against homosexuality throughout the day.

Steeve Winner, the author of this article, is an activist for LGBTI rights in Cameroon who writes under a pseudonym. 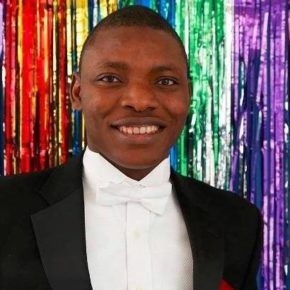