When leaders of former British Empire countries gather in London in April, that will be the time and place to push for an end to anti-LGBT laws in 36 of those nations, says LGBTI rights activist Edwin Sesange.

Sesange has launched an online petition urging the Commonwealth Heads of Government Meeting 2018 to support LGBTI rights. The petition has been signed by more than 46,000 people.

Who should the UK discuss it’s common future with? If it was down to you, would you choose the leaders of 36 countries which criminalize homosexuality?

That’s what will be happening in April when London and Windsor host the 52 Commonwealth countries for the Commonwealth Heads of Government Meeting 2018.

Most people in the UK, let alone around the world, don’t really understand the Commonwealth. But it is an internationally influential group made up of former members of the British Empire.

As such, many of them still hold on to colonial-era laws given by the English, criminalizing homosexuality. That’s shocking, given the English themselves scrapped that law back in 1967.

Can LGBTI people have a ‘common future’ in the Commonwealth?

The theme of this year’s Commonwealth summit is ‘Towards a common future’.

They want to focus on the building on the strength of the Commonwealth. The world leaders will apparently try to ensure this unique organisation is responsive to global challenges. And the Commonwealth secretariat claims they will deliver a more prosperous, secure, sustainable and fair future for all their citizens, particularly young people.

It would be wrong to dismiss the power the Commonwealth can have. In fact, it’s so important that the Queen herself is the organisation’s head. More surprisingly, there are countries lining up to join this institution.

It is true that we should have a common future as citizens. And CHOGM18 can do that, using its experience in addressing injustice and paving ways for development.

However, 36 of those representatives debating and deciding a common future for us in April 2018 will be from countries that criminalise homosexuality. What is more, seven of those 36 are from nations that impose life imprisonment for same-sex acts. Even worse, there is the death penalty in parts of northern Nigeria and rural Pakistan.

When gay people are criminals, everyone suffers

The CHOGM organizers have made it clear that the future of the Commonwealth depends on its one billion young people. That’s why the summit will have a strong youth focus.

So it’s worth them remembering what the Pew Research Centre in United States says about younger people. It found that the next generation can play a big role in influencing and adapting to positive attitudes to LGBTI people.

Therefore, I appeal to them as a national of a former colony of Britain and a member of the Commonwealth. Please, use this summit to empower young people to help LGBTIs.

That won’t just help LGBTI people in Commonwealth countries. It will help all citizens.

The Commonwealth wants young people to succeed. But we know that criminalizing homoseuxality has huge, negative impacts on countries’ economies, society and politics.

A number of studies have shown countries where gay sex is legal have a higher GDP rate compared than those that criminalize LGBTI people.

There is also a clear relationship between anti-LGBTI laws and higher HIV infection rates.

Almost half of the nations that criminalize homosexuality are in the Commonwealth. It is home to 30% of the world’s population but sadly 60% to HIV infection cases.

And the law affects basic justice.

Just this month Human Rights Watch published a report about LGBTI people in Ghana. It revealed how they were persecuted and tortured because of the colonial anti-LGBTI laws.

A number of Commonwealth countries see brutal murders of LGBTI people. Such killings are all too common in Uganda, Jamaica, Cameroon and Pakistan among others.

Many LGBTI people have been denied a right to assemble, expression and celebrate Pride, for example in Uganda in 2017. While others have been publicly humiliated by the authorities.

So it’s clear, without equality, the next generation’s potential can never be fulfilled. And without fairness, these countries can never be truly democratic.

Gay sex ban makes a mockery of the Commonwealth

There’s also a simple question of the Commonwealth’s own expectations.

The majority of the countries in the group have failed to adhere to its principles, values and norms. These are clearly set out in the Commonwealth Charter 2013 and call for non-discrimination and persecution of LGBTI people.

And so the continued criminalisation of homosexuality in most Commonwealth states makes a mockery of what this institution stands for.

On the positive side, there has been some positive progress in a few member states like Botswana and Lesotho among others, as well as marriage equality in Australia.

We have also seen Commonwealth countries use the United Nations to express public support for LGBTI rights.

However, to the best of our knowledge, the Commonwealth Heads of Government Meeting has never discussed the need to decriminalise homosexuality. They have never used their summit to talk about providing rights and protection to LGBTI citizens.

Britain is to blame for sodomy laws around the world

So why this institution to tackle the problem? Well, before colonisation, many of the countries had a more positive culture about embracing LGBTIs. It is Great Britain that exported homophobia to us, putting in laws against ‘sodomy’. And that has caused grave consequences to many innocent LGBTI citizens.

Therefore it is only right that the Commonwealth today should be part of the solution. What is more, the UK should do the decent thing. Prime Minister Theresa May should apologize for introducing these laws ahead of CHOGM18. And she should use the summit to address the problem.

That is why I appeal to you to sign this petition.

The organisers can achieve this by including lesbian, gay, bisexual, transgender and intersex human rights on the CHOGM main agenda. And they should invite openly LGBTI people from the Commonwealth to address the CHOGM leaders.

One of the barriers to this is that some western countries, like the United Kingdom are afraid of showing leadership on this issue. They claim it might be perceived as a western promotion of homosexuality to the Commonwealth.

That’s nonsense. It was the UK that introduced criminalisation to the Commonwealth.

In fact, countries that do not criminalize homosexuality – like Burkina Faso, Benin, Cape Verde, Chad, Gabon, Mali, Niger and Congo – were not part of the British Empire.

Likewise, in Asia, the former Attorney General of India, Mr Goolam Vahanvanti, made it clear that in India there was no such laws punishing same sex until the introduction of a penal code drafted by Lord Macaulay of the UK in 1860.

It’s not colonialism to point this out. Quite the opposite.

Being LGBTI is not against religion – that’s the ‘ultimate blasphemy’

Many others fear that their support for LGBTI equality might be against their religious beliefs. This is the politics of crazy pastors like Steven Anderson and terrorist groups like ISIS.

‘All over the world LGBTI people are persecuted. They face violence, torture and criminal sanctions because of how they live and who they love. We make them doubt that they too are children of God – and this must be nearly the ultimate blasphemy.’

And homosexuality is not a threat to Islam either.

The Al-Fatiha Foundation, the progressive Muslim Union of North America, Imam Nur Warsame, Muslims for Marriage Equality and Maajid Nawaz among others have all made it clear that LGBTI discrimination is against religious teachings.

We need you to speak out

But – despite their irrationality – these laws will not change themselves. It is up to us.

There is so much individuals, businesses and organisations can do to cause positive change for LGBTI people in the Commonwealth this year.

During CHOGM18, you can raise awareness about the need for equality. Use LGBT History Month, Digital Pride and the Pride season to raise the visibility of LGBTI people.

You have access to your social media, schools and workplaces among others – use these as your platform. Encourage your company or organisation to actively support the LGBTI community and speak up about these issues.

Let’s show those attending the Commonwealth meeting how Britain has moved from discrimination to equality – and is stronger for it.

Reach out in a friendly manner to those visiting for the event and express the need for equality.

Make it clear in all your engagements and comments that anti-LGBTIs laws were introduced by the United Kingdom. Simply, they are just colonial baggage which should be abolished.

You can urge your governments to lobby their counterparts for equality.

You can support local LGBTI organisations in those countries and internationally.

All in all, we need your involvement and we really appreciate it.

Edwin Sesange is African LGBTI rights advocate and a student of criminology. A native of Uganda, he currently lives in London.

This commentary also appeared in Gay Star News. It is published here with the author’s permission. 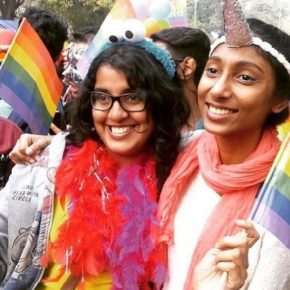