Ugandan LGBTQ rights activists Barnabas Wobiliya and Apollo Kann found refuge in the United States last year and since then have continued their work on behalf of LGBTQ Ugandan refugees in Kenya.

For Ugandan activists Barnabas Wobiliya and Apollo Kann, living in Utah never crossed their minds. But after facing persecution and violence for being gay, the men wished for a new, safe place to call home. They left their homes in Mbale, Uganda, to seek asylum in Kenya as refugees. In 2016, the United States, which under the Obama administration had offered special protection for LGBTQ-identifying refugees, granted their wishes.

Since arriving in Utah, Barnabas, 35, and Apollo [also known as Kamarah Apollo], 28, who are now roommates, share an apartment in Salt Lake City and have been adjusting to life in America. They’ve made friends with LGBTQ Utahns and connected with local groups like Equality Utah and The Utah Pride Center. As special guests, the men attended Equality Utah’s 2016 Allies Dinner. They were amazed at the size and energy of the local LGBTQ community. “I wish this was in my country,” said Barnabas.

Although Barnabas and Apollo have faced challenges as Ugandans settling in Mormon-dominated Utah, they are free from the daily stigma and continuous threat of violence.

Barnabas comes from a large family that includes 15 siblings. He was drawn to activism after two siblings died of HIV/AIDS-related complications. “When I saw this happen, I started advocating for them,” he said. “I could not watch them die.” He has been an activist ever since.

Apollo also grew up in Mbale. He knew he was different at a young age, but didn’t understand what being gay was until his late teens, when he had his first relationship. His mother was a feminist and activist for women in Uganda, and she inspires the work he continues today. “If my mom can do it,” said Apollo. “So can I.”

Apollo trained as an outreach worker in Uganda with the Most At Risk Populations Initiative, providing HIV testing, condoms, lubricant, and resources to gay men and sex workers in the community.

For gay, lesbian and transgender people, life in Uganda means constant discrimination and violence. The country is dominated by an extreme Christian ideology that condemns gay and lesbian relationships and gender nonconformity as moral and legal crimes. Many Ugandans believe that HIV/AIDs is a curse on gay men for their sins. Homosexuality has been criminalized in Uganda for several years, but in 2014, the country’s parliament passed the Anti-Homosexuality Act. The bill is a slightly less punitive version of a previous law, which western media dubbed the “Kill the Gays” bill for its punishment of gay and lesbian relationships with the death penalty. …

In the wake of the 2014 law, Barnabas, Apollo, and other LGBTQ people and activists faced increased danger. The HIV/AIDS center where Barnabas worked had to close its offices and cease treating patients for fear of harassment or worse. “We lost jobs. We were evicted from our houses,” he said. Discrimination was a daily occurrence, and mob justice became common.

Motorcycle gangs roam communities, looking for LGBTQ people to harass or turn in to the police. The locals call the gangs “Boda Boda Men,” after the East African term for the motorized bicycles used as taxis in the region. Apollo was attacked multiple times, both by the Boda Boda men and by the police. They threatened him, saying that Uganda was “a Christian country.” Blackmail was common, as harassers offered money in exchange for the names of LGBTQ people.

And yet despite the violence, the men persisted in their activism. …

In 2015, a neighbor of Barnabas reported him to the police. Fearing his safety, he left. That same year, Apollo was beaten so badly that his body ached and bled. Finally, he told a friend, “Let’s leave everything and seek asylum.”

Both men left their homes and sought protection in Kenya’s capital, Nairobi, where the United Nations Commission of Refugees allowed them to register for asylum.

Although many refugees in Kenya are settled in camps, Apollo and Barnabas were allowed to live in the city where they could try to work for money. They both feel lucky to not have been settled in the refugee camps, where LGBTQ people continue to face harassment from other African refugees. According to Apollo, for many in the camps it’s like “jumping out of the fire and into the frying pan.”

Apollo was elected to represent LGBTQ in the Nairobi refugee community. He worked to secure more funding for gay men in the refugee camps, many of whom were sick with HIV/AIDS-related illnesses or tuberculosis.

Barnabas worked as an HIV/AIDS outreach coordinator. He got a job with Health Options for Young Men on HIV/AIDS/STI, an organization that provides education, counseling and treatment. The group also works to fight stigmatization and criminalization of LGBTQ people and sex workers. He helped form “Health Matters,” an HIV/AIDS group on the WhatsApp messaging service. The group allows outreach workers get information to people who have trouble accessing clinics. Barnabas still works with the group, helping educate members on HIV prevention and finding financial, social, and mental support.

Barnabas also assisted in forming the Team No Sleep Foundation, in Nairobi. The organization makes hand-sewn bags, clothing and curtains from African fabrics. The proceeds go to support LGBTQ asylum seekers in Kenya. He said the refugees need the support because the money they receive from UNHCR is not enough to cover treatment and medication on top of basic food and housing needs. In 2016, he was awarded “Best Peer Educator and Outreach Worker” for his work to create HIV/AIDS awareness for sex workers in Kenya.

Apollo and Barnabas were granted asylum in the United States in under two years. They felt lucky because the process can take several years for many refugees.

Now the violence facing the men has dissipated. They found work at the Salt Lake International Airport, and have made friends in the community. Neither man says they have faced much discrimination from the Utah community, but according to Apollo, the biggest challenge has come from other African refugees they interact with. While the Ugandans were given asylum for LGBTQ persecution, other refugees come from African countries ravaged by war. Many of these people share the same anti-gay feelings as the conservatives that led Apollo and Barnabas to flee their homes. “We are still surviving,” said Apollo. “Still, this life is better.”

Apollo and Barnabas continue their activism, working online with African organizations, and speaking out about the persecution they faced. Why do these men continue to spend their time, money and energy to help LGBTQ people, even after facing so much discrimination and violence themselves? “I have a heart to help,” said Barnabas. He said he has the will to continue because, despite having to leave his family and home, he feels part of a larger purpose.

“I have the biggest community: The LGBTQ community,” said Barnabas.

Apollo, too, said he cannot stop working to help LGBTQ people still in Africa. Since leaving Africa, he has lost ten friends to HIV/AIDS because they can’t afford treatment. He hopes that Americans, including the LGBTQ community in Utah, will want to help, too. “My friends are dying,” he said. “I wish I could help them out.”

On Sep. 30, Apollo and Barnabas will be honored at this year’s Equality Utah 2017 Allies Dinner.

To purchase items from the Team No Sleep Foundation, email teamnosleepfoundation@gmail.com or visit the group’s Facebook profile. 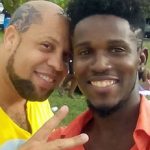